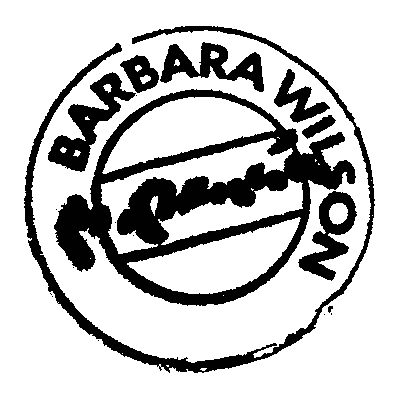 She just calls herself Barbara Wilson, catchy and fast.

But underneath this simple last name, which she shares with a famous jazz pianist and an American president is hidden a poetic apocryphal:

Artistic business is a universal affair, not national. But the universal has to be concrete, so that it does not become pretentious.

Barbara Wilson’s Polish connections are clear. Work discipline, uncompromising, the existential seriousness. Who ever has experienced eastern Europe from within has meat resistance and have known indignation, revolt on their own body. At the same time one has kept an unbroken connection back to the European cultural inheritance, literature and art history. A continuity that is defused in a western richness and arrogance.

Barbara Wilson stands strong and humble on steady ground with her exploration of life’s and times questions and with an artistic standard with held. Un-frightened and gallows humour is seen in her work when she works in a Jeronimus Bosch like middle ages inspiration which has been exposed a surprising interpretation. Wilson paintings- is it altarpiece or comic book? It stretches between the profound and the sacred, where priest and fool maybe are the same.

Poland is a country, which history has inflated to an empire and cut into pieces and crushed. To have Poland in your blood is to be everything and nothing at once, distinguished and humble. Barbara Wilson’s paintings have sometime an iconic character, and they circle around the human possibilities and limitations. The Polish people have from the old days believed that any one military power must stand down before the The Black Madonna and the recently deceased polish pope was convinced that in was the virgin Marie’s power the crushed communism.

I myself have always felt a fascination of the polish way of looking at things. Originally George Brandes inspired me to love the polish culture. I have love Polish baroque, music, architecture and “Chansons” said in the sensual sound language like a French comparison of Russian.

And I got a direct experience of the polish sensibility when Barbara Wilson’s painting urged my writing and my words became her paintings in a totally unique piece of art. Not book or playing cards, nor painting or poetry or a occult game of tarot but something completely different, we not completely understand, but was first known as something in polish as Godzinki and after that in Danish- Timebog.

With poets as Gombrowcz in the back of ones head the Danish way of conceiving art look like therapy and cosiness. I can clearly remember that showing of Yvonne in the Royal Danish Theatre in its time. The drama about the polish prince, where love triumphs over the prince degust of fish. For years I had the queens grass green velvet dress in my possession from Jean Voigts set-design. Now it is Barbara Wilson that is the inspiration for the coming generation of theatre people – And they should be satisfied with it.

Because the Polish recipe is equal amounts of hardness and humour. It is where life is crushed and coherence broken down, that the challenges take over. As in one of my favourite poems by Wislawa Szymborska:

He cannot even do that,

Which is directly connected with his subject,

Not dig the grave,

Not build the coffin,

Not clean up after him.

He is occupied by killing,

But does it so inelegantly,

Without system or routines,

As if he was practising on every single one of us.

Barbara Wilson is also practising, but that is in the name of life – and her hands do not shake.